Welcome to the Roaring Twenties. The flappers are flapping, the jazz is mighty swell and you can become a star of the silver screen. Warren G. Harding is the Big Cheese these days because we finally realized that Wilson fella wasn’t the Real McCoy. Now let’s grab some hooch at the gin mill.

If you couldn’t tell, I looked up some slang from the 1920s. What’s a reporter to do when everyone’s saying we’re now entering the second Roaring Twenties? As we slowly start to come out of a global pandemic, people are ready to let loose like they did after the last big pandemic a century ago.

People are imagining a hedonistic decade where we’re all partying more than ever. While that sounds fun — and people will surely be getting wild once the vaccines take root in more of our bloodstreams — there are also some negative ways the 2020s may resemble the 1920s.

To understand why the Roaring Twenties roared so much, we need to first understand the decade that preceded it. The 1910s were a tumultuous time that featured the first World War, racial violence, massive labor strikes, and, of course, a pandemic that killed almost 700,000 Americans. It was, to put it mildly, not a fun time to be an American.

It certainly was a time filled with creativity, jubilation and prosperity for many, but it was also a difficult period due to income inequality and racial strife. Fighting our way out of a pandemic and celebrating being able to be together again isn’t the only thing we have in common with the people who lived a century ago

Kevin Kruse, a history professor at Princeton University, tells The News Station it was “total chaos.” Once the decade ended and the pandemic subsided, he says, people really longed for a return to normalcy.

“It’s a period of people desiring to get away from grand crusades and major political causes and indulge in some of their baser instincts,” Kruse says. “At the same time, the economy booms in the 1920s, and there’s a lot of disposable income out there.”

After running on a “return to normalcy,” Warren G. Harding became president in 1921. This, in itself, is similar to our day. President Biden ran on a return to normalcy after the tumultuous Trump years. Harding wasn’t seen as a bold figure, Kruse says, but more as a man who could get the job done, which is also how many view Biden. I’m not saying Biden is just like Harding, but there are some similarities.

Eric Rauchway, a distinguished professor of history at the University of California, Davis, tells The News Station the 1920s became a decade of “cultural creativity.” After World War I, the US economy fared much better than the economies of other Western nations. Thus things were looking good, and they felt good, too. Hollywood, the music industry, automobile manufacturing, home ownership and radio started really taking off.

“Within the United States, you had the invention, near enough, of consumer credit as we know it — first by GMAC, later extended by other companies — to fuel the buying of all those consumer electronics and cars and music and movies,” Rauchway says. “For the first time, a lot of Americans went into debt as an ordinary part of buying stuff. Which was going to turn out badly at the end of the decade.”

While we’re talking about money, it’s important to note: Much like today’s lopsided economy, many Americans were locked out of the Roar of the 1920s. A lot of people were not doing well at all. The Roaring Twenties and what we’re experiencing today, Kruse maintains, are quite similar when you look at the economics.

The stock market and the economy were doing well, Kruse contends, but “lots of people were being left behind.” Sound familiar?

We think of the Roaring Twenties and we imagine everyone having a decadent, easy time, but a lot of people were really struggling to get by. Things only got worse for them when the economy crashed towards the end of the decade.

Their economic picture resembles what we’re living today, but there are also ways in which racial issues are similar. Immigration historian John Higham often referred to the 1920s as the “Tribal Twenties.” This was a time of major immigration restrictions, including the Immigration Act of 1924, which Rauchway calls an “explicitly racist law.”

It basically halted immigration from Asia, while slashing the number of immigrants allowed to enter America at all, leaving the New York Times to proclaim, “AMERICA OF THE MELTING POT COMES TO END.”

“White supremacism hasn’t been this mainstream, nationwide, since the 1920s,” Kruse says. “I think we’re seeing a return to that.”

The 1920s wasn’t a time when everyone was embracing their baser instincts. The fight over prohibition is an example of how many Americans tried to push back against the freewheeling lifestyle many of their neighbors were adopting. While flappers get all of the love in the collective American memory, many women opposed booze — well, more so they opposed their husbands spending their earnings at saloons before many would come home and abuse their wives.

That’s why many of the very same women who were disempowered by the Constitution itself fought for and eventually secured the right to vote in 1920. That very year, they promptly used their hard-fought new right to upend America’s sudsy culture (an experiment that lasted some 13 years, even if it never truly stopped the booze from flowin’). 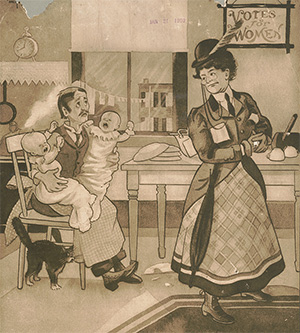 Image courtesy of the Library of Congress.

At the same time, the KKK pushed back against these cultural shifts for very different reasons, Kruse says.

All told, the Roaring Twenties were more complex than how they’re often remembered. We tend to focus on the fun, great dresses and enviable stemware, but we shouldn’t forget the major problems America faced in that era.

It certainly was a time filled with creativity, jubilation and prosperity for many, but it was also a difficult period due to income inequality and racial strife. Fighting our way out of a pandemic and celebrating being able to be together again isn’t the only thing we have in common with the people who lived a century ago.

If we’re smart, we’ll learn some lessons from what we’ve been through as a nation instead of making the same mistakes. Now, if you need me, I’ll be at my local speakeasy.

Thor Benson is an independent journalist who has contributed to The News Station, The Atlantic, The Daily Beast, Rolling Stone and many other publications. Find him on Twitter at @thor_benson.

Thor Benson is an independent journalist who has contributed to The News Station, The Atlantic, The Daily Beast, Rolling Stone and many other publications. Find him on Twitter at @thor_benson.

Thor Benson
Thor Benson is an independent journalist who has contributed to The News Station, The Atlantic, The Daily Beast, Rolling Stone and many other publications. Find him on Twitter at @thor_benson.
More Articles